The Parking Lot Inspection- What to Expect
​

​         It’s fairly easy to determine when repair is needed for a deteriorating parking lot, but without knowledge or experience in asphalt pavement repair it may be tough to decide how to fix it- not a job for the novice. The parking lot should be inspected on a walking tour- not from a slow moving vehicle. The inspector who walks the parking lot will be able to notice small cracks and defects, and signs of potential issues. The key to evaluation is to identify the types of pavement distresses and determine their cause. Knowing what caused the distress will determine the type or extent of repair.

The practical understanding of why parking lots deteriorate will enable a more useful discussion with the inspector. Knowledge really is power and when you possess it your less likely to be misled. The following are common causes of a parking lot’s decline:
Poor drainage will quickly cause a breakdown in the asphalt pavement’s foundation as moisture saturated soil goes through freeze and thaw cycles (expansion and contraction). Once the pavement’s foundation is compromised it will reflect up into the pavement- breaking it up.
​

​Upheaval of pavement is due to the swelling of the foundation- caused when moisture saturated subsoil morphs into frozen soil. When water turns into ice, it expands with great force swelling the soil which in turn pushes up the road forming a hump.  The swelling effect of moisture in clay soils will also cause upheavals- this is called "shrink and swell soil". 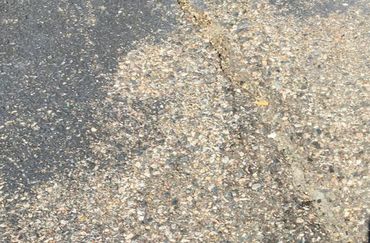 Asphalt Raveling
​Asphalt Raveling is the erosion or loss of the asphalt binder that provides the glue that holds the aggregate together.  First the asphalt’s dark black color will fade to gray and appear rough because of the loss of the fine aggregate which exposes larger pieces of aggregate. As the erosion continues, the pavement becomes pock marked- eventually failing into a surface of rough jagged stones. Aged pavement will display this type of damage caused by years of exposure to UV rays of the sun. Laying asphalt pavement too late in the fall will also damage the binding leading to crumbling pavement. Another problem is Improper compaction. For example, pretend the asphalt mix is a clay bowl that is not compacted properly- it will not dry solid but with voids that weaken during use. After a short time, the bowl begins to crack then will finally break with further use. 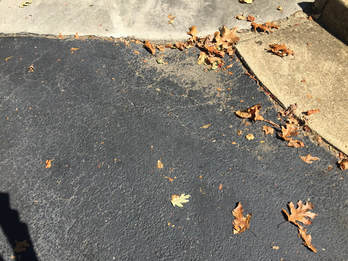 Parking Lot Depression
​​Depressions are typically shallow in depth, directly lying over the fault within the foundation and may be accompanied by cracks. The fault could be a foundation settlement because of incorrect compaction during the build or a water intrusion. The depression will mirror the foundation settlement. They can also be caused by traffic heavier than what the pavement was designed for. Many times, during the development stage, Garbage trucks and Delivery trucks are not considered part of the expected parking lot traffic which allows for less asphalt to be laid down. However, garbage pickup and delivery of goods are in general a necessity and should be planed for. It doesn't have to lead to the entire parking lot being strengthen, just a delivery and trash pickup lane can be implemented.
​
​

Alligator Cracks are interconnected cracks forming a series of small oblong shapes spreading out to form many pieces resembling the pattern of an alligator. Most of the time its caused by an unstable foundation saturated with water. The effected areas are usually not large, but sometimes they do cover a vast area of pavement. 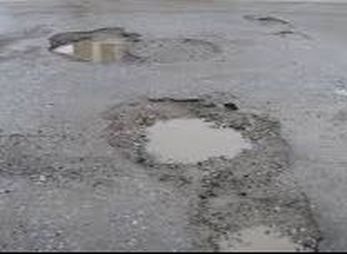 Potholes are bowl shaped holes of different sizes within the pavement. Potholes can be caused by the neglect of repairing alligator cracks. Direct result of the pavement foundation disintegrating underneath because of poor drainage, thin pavement, and incorrect asphalt mix.
There are standard specific fixes for each of the above parking lot failures.
Some problems require a full depth patch: Excavating down through damaged foundation and removing all loose debris. The damaged foundation is then repaired and a special asphalt patching mix is placed.
Other problems require a shallow patch: The surface layer of damage asphalt will be removed and a asphalt patching mix will be laid down.
The Inspector's report will include detail of what type of fix each fault requires.

Overlay or Asphalt Resurfacing is a popular way to repair or renew an existing asphalt park lot by paving overtop of it. However, the original parking lot pavement needs to be prepped to regain a long-lasting, useful and attractive lot. Because if the preparation is hurried or just missed altogether the new parking lot will soon look as bad as the original.

​Procedure
The deteriorating parking lot must be milled or shaved off just enough to bring the original pavement into a more even surface to help match the existing landscaping around it. Areas that are in very poor condition must be removed and patched. The pavement is then cleaned, an adhesive is laid down, and the new asphalt is applied in layers.
Overlaying is less expensive than fully reconstructing a paved surface, and typically takes less time, making it an attractive option when considering repairing a large parking lot. Keep in mind, that areas that now puddle will again puddle since in most cases, the grade cannot be altered by just paving an overlay. Also, any problems with the subbase will reflect back up through the overlay. The subbase must be repaired to prevent “reflective cracking”.
​Life Expectancy for an overlay (resurface) parking lot is 8 to 10 years if properly maintained.

Parking Lot too far gone for a resurface? Click here for more information!